Fire extinguisher kit to be placed on an emergency vehicle (quad, pick-up, van or trailer) with high or low pressure motor pump.

Autonomous and compact fire-fighting equipment for immediate action.
The vaporized water makes it possible to increase the heat exchange area and to absorb a greater amount of heat and thus obtain a greater cooling capacity.
Fire kits are formidable tools against fire as first aid equipment.
They are ideal on small vehicles, where larger ones cannot pass.
To help you define the ideal kit for your needs, do not hesitate to consult our brochure: 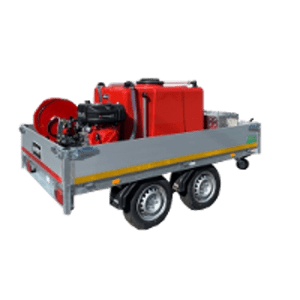 In all fires, particularly forest fires, there are 2 major problems:

• The distance
• The lack of water

Le CRITICAL FLOW (CFR): is defined by the minimum flow of water necessary to extinguish a fire sufficiently in a given area.

In the near future, solutions will have to be found to reduce the "critical flow" as much as possible during forest fires and for this we will have to find extinguishing methods which will save scarce water and cover great distances. with an ever lower weight and volume of equipment in short time.

Over the years, new technologies have been developed to allow intervention with the least amount of water possible depending on the extinguishing capacity and with an ever lower weight and volume of equipment. High-performance equipment can now vary distances in less time and with less weight. 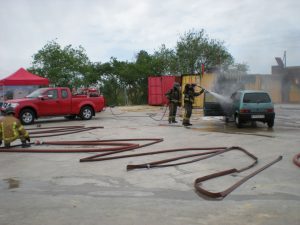 Studies were carried out in the 1930s by the Paris Fire Brigade.

Comparison of extinction at low pressure (7 Bar) and high pressure (40 Bar) according to the 1999 “Svensson and Lundstrom” study.

CONCLUSION : The high pressure offers greater water savings, less critical flow and stability of fixing the drop of water in front of the fuel by capillary system.

Principles of extinguishing efficiency with high pressure water and / or foam

• Efficiency by heat absorption
Extinguishing can be done by spraying water to absorb a large amount of heat. Water requires a heat quantity of 573 Kcal (2395 KJ) in order for the liquid vapor state to be carried out. Traditional systems produce relatively small water droplets large with small cooling areas. In the PRC, only a small percentage of water is evaporated and used for extinction. For this reason, large quantities of water are required to exceed the critical value.
If the pressure of the extinguishing agent is increased so that the drops of water are only half the previous diameter, the consumption of the extinguishing agent and the extinction times will be reduced by half or even lower speeds.

• Efficiency due to asphyxiation

The fractionated water occupies the space surrounding the fire, depriving it of the oxygen essential for its combustion and preventing its reactivation.
The condensed steam also makes it possible to eliminate part of the gases and fumes during combustion present in closed rooms. (By comparing water at 100 bars with water at 40 bars of pressure, at 100 bars a curtain of water mist is created 3 times larger than at 40 bars, and with a similar consumption.

• Effectiveness by impact
Extinguishing can be done through the vaporization of water to absorb a large amount of heat. For the liquid state to “vapor” stage to be carried out, the water needs an amount of heat equal to 573 Kcal (2395 KJ).
Traditional systems produce relatively large water droplets with small cooling surfaces. In the PRC, only a small percentage of the water is evaporated and used for extinction. For this reason, large quantities of water are required to exceed the critical value.
If the pressure of the extinguishing agent is increased so that the drops of water are only half the previous diameter, the consumption of the extinguishing agent and the extinction times will be reduced by half or even lower speeds.

A selection of pumps adapted to your specific needs

Large range of firefighting and flood fighting motor pumps. Pumps can be skid-mounted, portable, or trailer-mounted

Range of motor pumps resistant to sea water. Can be used for security services on ships and oil ports, commercial ports

Fire pumps are usually approved by a certification body and are powered by an electric or diesel engine or sometimes by a steam turbine.

Motor pumps used during flooding to collect or drain water

Motor pumps and a swimming pool to fight fires, as well as our range of cellar pumps intended for the evacuation of rainwater and clear water!